The 5-minute walk, also known as the “pedestrian shed” is considered to be the distance people are willing to walk before opting to drive. Based on the average walking speed a five-minute walk is represented by a radius measuring ¼ of a mile or about 400 meters. This rule of thumb is used to calculate public transport catchment areas or to determine access to destinations within neighborhoods. 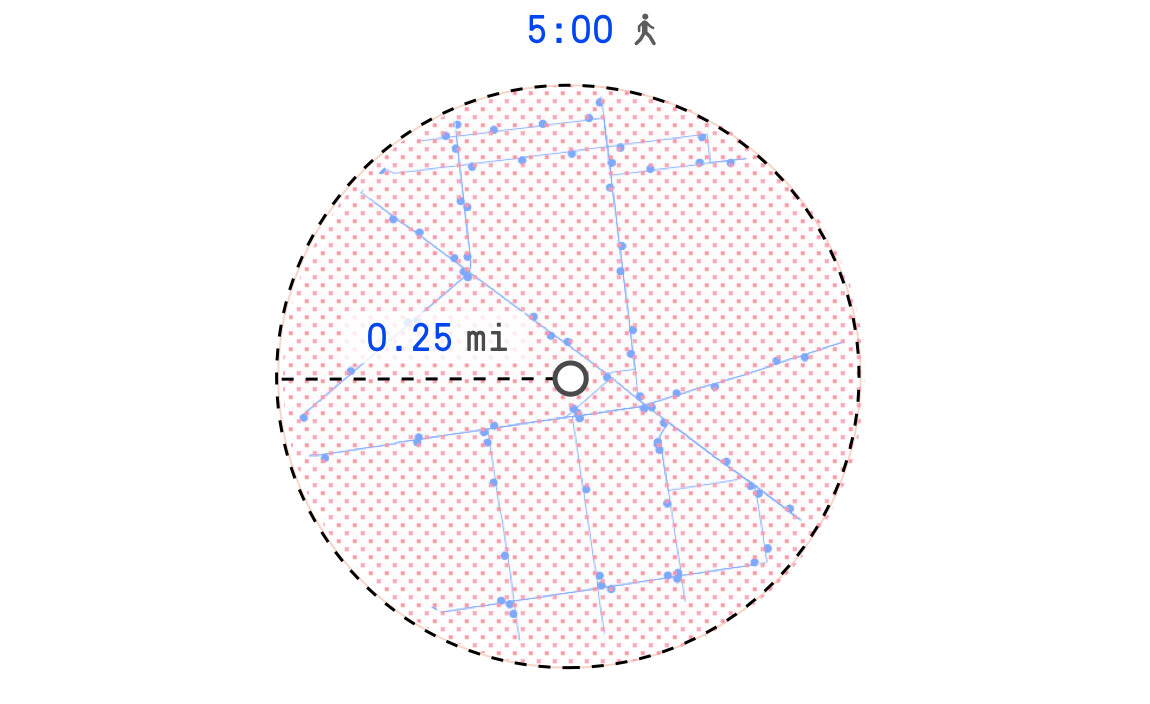 The pedestrian shed is usually placed around a community center or a common destination such as a school or a public plaza, where social and commercial activity is focused. In urban planning, the five minute walk sets a scope for collecting both quantitative and qualitative data at a human scale.

“In a sense every great city is a conglomeration of small communities.”  — Clarence Perry

The 5-minute walk can be traced back to a concept known as the “neighborhood unit”. The neighborhood unit is a community model conceived in the 1920’s by Clarence Perry. It gained popularity after being published in the 1929 Regional Survey of New York City.

“The scale of Perry’s Neighborhood Unit was of particular importance. It spread across an area of ¼ mile radius, that is, roughly ½ mile wide and ½ mile long, surrounded by fast-moving arterials.” — Michael W. Mehaffy et al. (2014)

Perry placed the elementary school in the center of the neighborhood and used it to determine the size and structure of the residential community: the school had to be within reach for all residents and set the quarter of a mile walking distance threshold in the unit scheme. Together with local retail shops, public spaces and residential units, the elementary school was one of the four main functions in the neighborhood unit, as conceived by Clarence Perry.

Through the years the neighborhood unit concept has received both high praise and severe critique. Andres Duany, one of the key figures of the New Urbanism movement, has described Perry’s scheme as the “most famous diagram in the history of American planning.” However, a number of scholars, have argued that the concept contributed to the development of gated communities, some even refer to it as “a mechanism of racial segregation“.

The general assumption that most people are willing to walk for about five minutes before opting to drive has been subject to debate in urban planning. Most researchers agree that the quarter of a mile (400m) walkable catchment is a reasonable distance for determining access to public services and as a result for measuring how walkable a community is. In reality, the street grid, the sidewalk design, environmental factors and safety considerations affect how long people are willing to walk before reaching a destination.

A large part of the research on walking behavior focuses on commuting and access to transit. Results suggest that most people are willing to walk longer to access rail than to access bus. That is why the 400-meter buffer (0.25 miles) is usually applied around bus stops and the 800-meter buffer (0.5 miles) – around rail stations.

A 10-minute walk is also considered a reasonable distance for accessing public parks. This is the distance that The Trust for Public Land applies in their rating system developed to measure how well the 100 largest U.S. cities are meeting the need for parks. In 2017, San Francisco was the first city in the United States to reach the 10-minute walk to a park goal for all of its citizens.

The duration of walking trips also depends on their purpose. Trips for shopping, errands and reaching transportation are shorter, while recreational walks tend to be longer. According to the U.S. Department of Transportation’s National Survey of Pedestrian and Bicyclist Attitudes and Behaviors, the average reported walking trip most recently taken during the summer was 1.3 miles in length. The most common purpose of trips was for personal errands (38%).

Exploring land use mix around Astor Place in Manhattan — 5 vs 10 min buffer. Image by Morphocode

Walking behavior depends on a number of location-specific factors such as proximity to destinations and perceived safety. It also varies across age groups and socio-economic status. Both the 5 and 10-minute walk thresholds are applied in planning. While the 5-minute walk remains an important determinant of urban size, the more generous 10 and even 20-minute walkable distances are widely applied in policy.

“Walkable neighborhoods are typically characterized by having a range of community services within 5-10 minutes (400−800 metres/0.25-0.5 miles) walking distance of residential areas which residents may access on foot.”

The pedestrian shed is a structuring component in neighborhood planning. It is used to determine the location of schools, measure accessibility to public open space or even to define the sidewalk width. 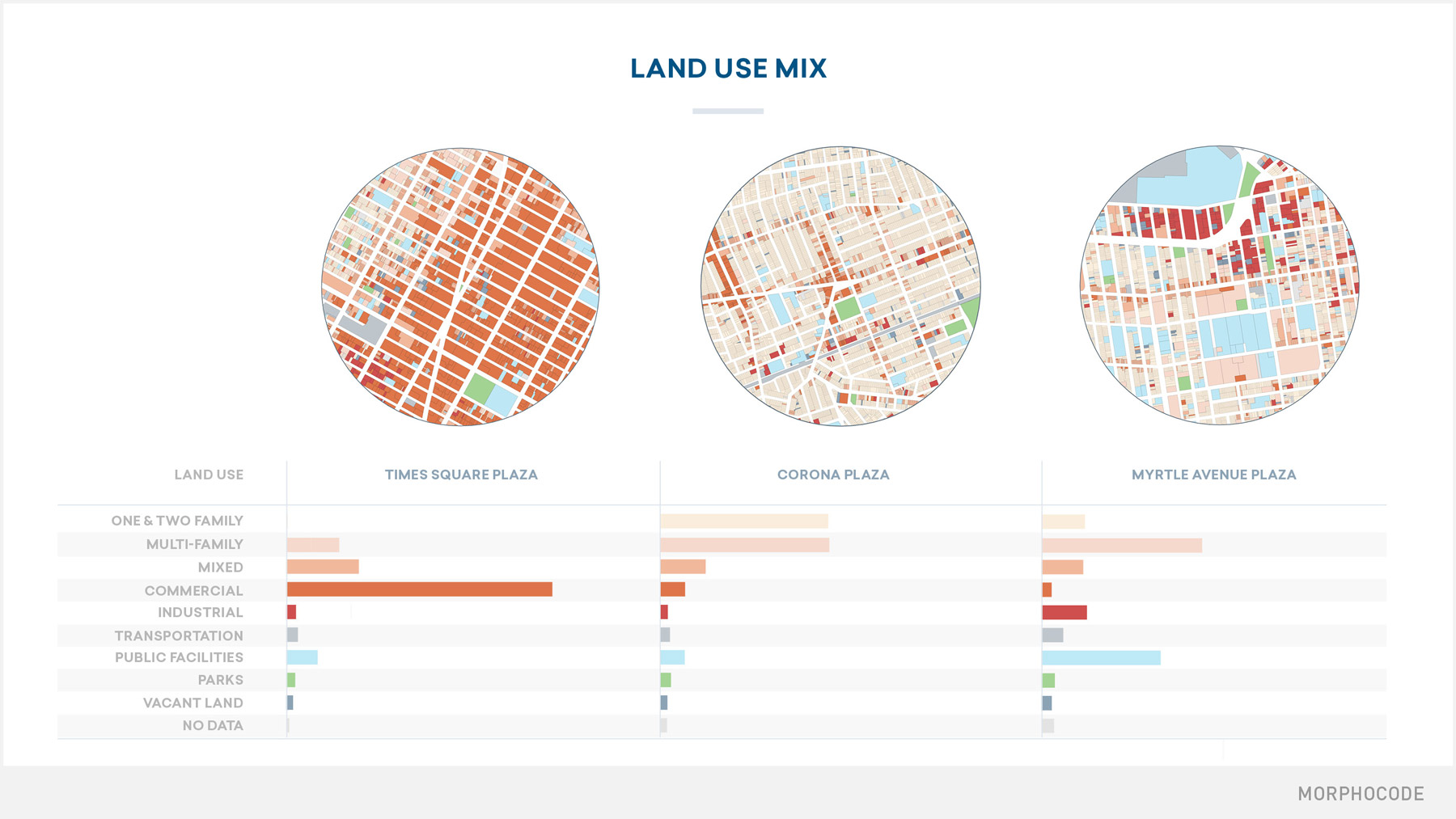 Land use mix within a 10 minute walk. Comparison of different locations.

In location analysis, walking distances set a scope for collecting both quantitative and qualitative spatial data. They also incorporate the human scale in urban policy by providing a generic framework for community planning based on proximity.

For example, one of the central goals of OneNYC – New York City’s strategic development plan – is to increase the percent of New Yorkers who live within a 10-minute walk to public open space. The NYC Plaza Program, which celebrated its 10th Anniversary this year, is part of that effort. Since its inauguration, the program successfully combined the principles of tactical urbanism with a data-driven approach to planning and design. The result is over seventy new neighborhood plazas in areas that previously lacked quality open space. 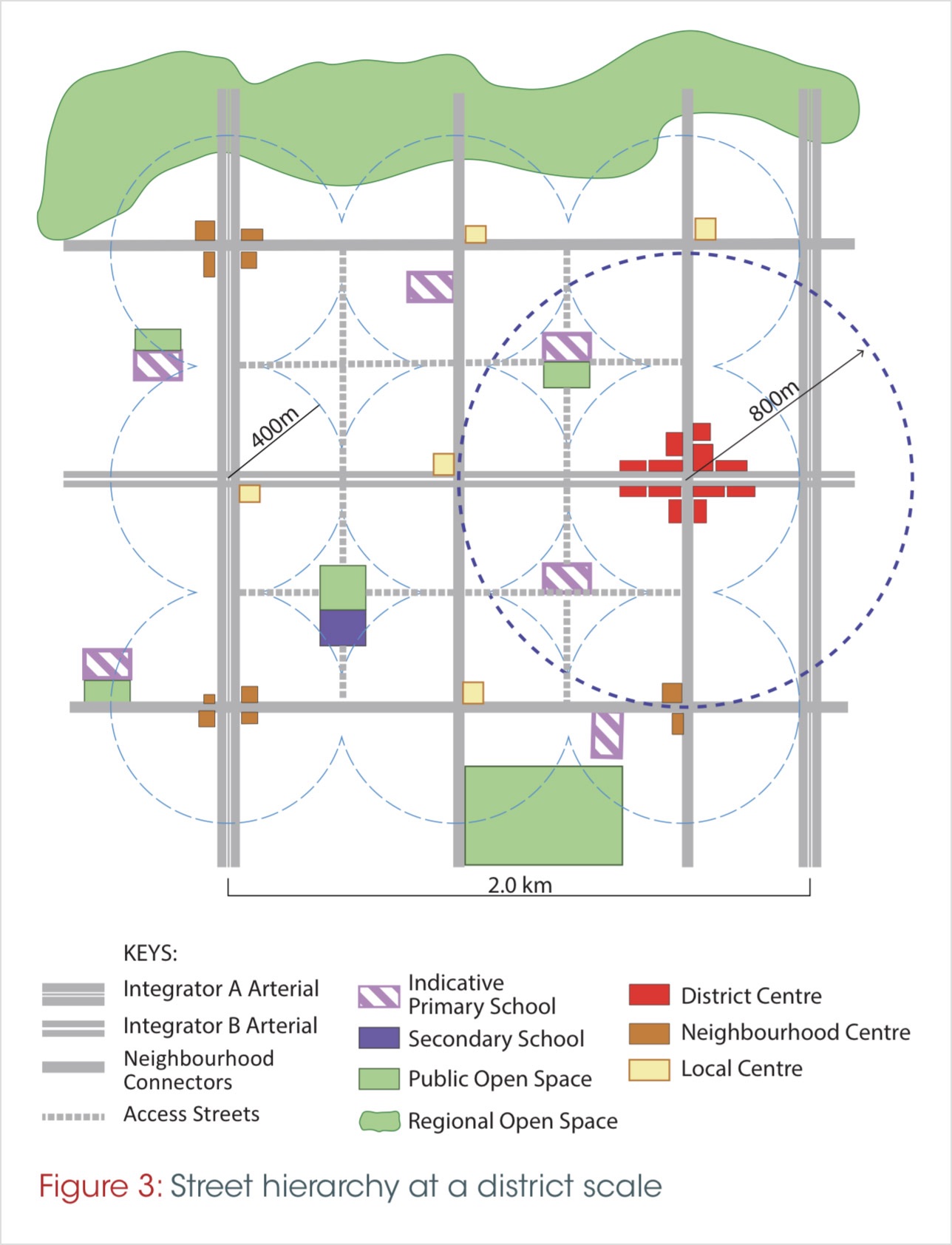 Meanwhile cities like Portland, Detroit, Atlanta and Melbourne have embraced the “20 Minute Neighborhood” concept. According to Melbourne’s planning strategy, 20-minute neighborhoods aim to encourage local living by creating accessible, safe and attractive local areas where people can reach most of their everyday needs within a 20-minute walk, cycle or local public transport trip.

20-minute neighborhoods require good access to public transport and a well-connected pedestrian and cycling network. Another hallmark of the concept is the provision of activity centers with a variety of services that support local living. Ultimately, the goal is to create a city of 20-minute neighborhoods.

Walking distance measures have also made their way into the world of LEED, namely The LEED for Neighborhood Development. This certification incorporates a number of metrics based on walking distances with an intent to reduce vehicle usage and encourage walking, biking and transit use. The rating system relies on both quarter and half-a-mile buffers to measure components such as connectivity, neighborhood assets and land use mix.

Measuring the city on a human scale

The pedestrian shed has become a tool for promoting the human scale in urban planning. It’s a dimension upon which to envision compact, connected and well-served communities.

In the last months, we’ve been working on a new tool that will allow you to explore various urban metrics, based on walking distances of a designated location. The tool will provide access to location-specific data in a fast and intuitive way, covering topics like land use mix, access to destinations and mobility.

The tool is still in beta and will be available soon. 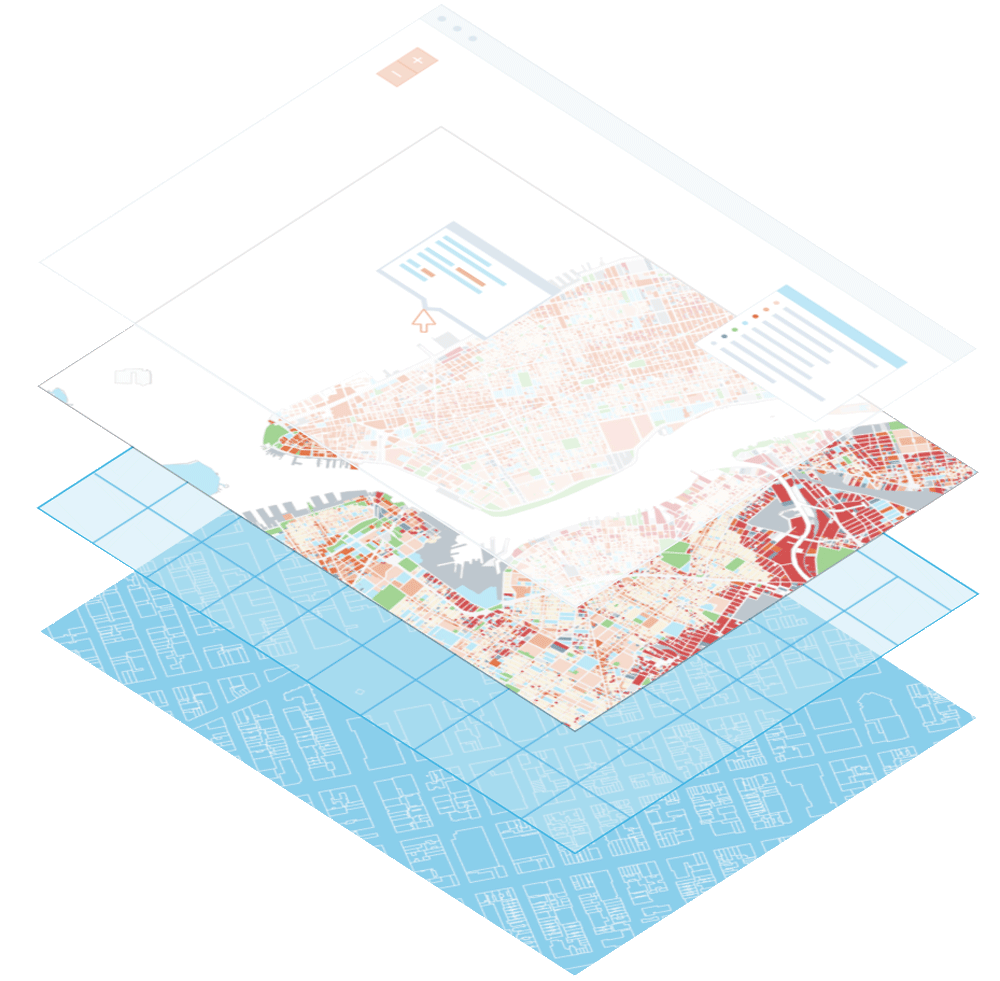 Our video course Mapping Urban Data is now available!
It contains 30 carefully organized and beautifully illustrated videos that will lay a solid foundation for your mapping skills. 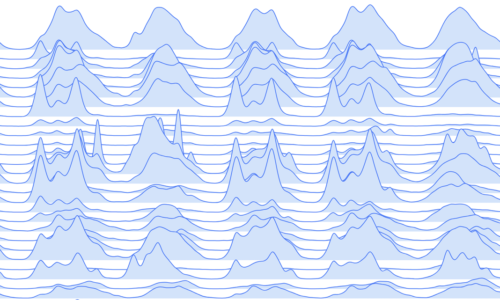 The most common ways to visually organize information are based on location and time. In [...] 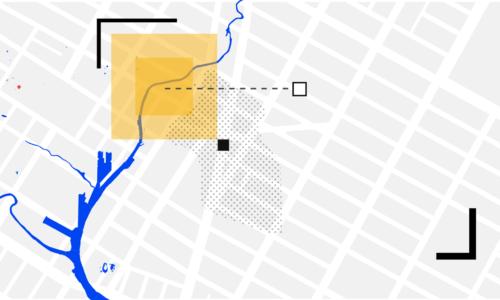